Our house. Our history.

It was a disease, tuberculosis, back in 1940, which originated this story. One of the sons of Bartolome Ros contracted this disease and in those years the only medical recommendation was”breathing mountain air.” 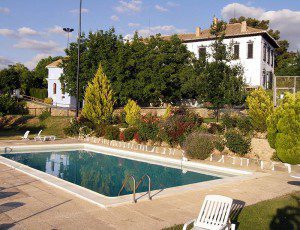 With this mission, Bartolomé Ros began the search for a mountain farm where his family move. Just over a year later he found the Cortijo Balzaín, an old farm located in the foothills of Sierra Nevada, very close to the town of La Zubia, Granada. From the outset it was clear that this was the right place, but it was the years ahead which eventually conquer the family. Nature, tranquility and the possibilities of autonomy fostered in the Cortijo Balzaín confluyeran different families of foremen and farmers. Even today these relations are preserved, with Pepe, the current foreman Cortijo, born and raised in those same land where his father worked.

In the big house lived the Ros family in the house at the entrance, the foreman, and in the houses located in La Fuente del Alamo, along with a dovecote with more than 200 years, lived the rest of workers.
Bartolomé Ros’s passion for Almendros encouraged him to plant all the lands of Cortijo with them. Between terraces that descend to the ravine where thaws Sierra Nevada, 100 hectares of almond trees display a unique landscape in late winter and early spring stained white slopes.

Bartolomé Ros always wanted that special place was a haven of peace and family, but his family extended to workers and friends, so every summer celebrating his birthday with a large picnic inviting people of all kinds, finding unthinkable situations, for example in the post war, which came to share lamb El Algarrobo, a famous bandit of those lands, with the civil guards who sought him, but they both knew that in those lands and on that day, the truce was a requirement the patriarch.

Over the years, the search for career opportunities and the very life of each of their children, caused the Cortijo was gradually becoming as a permanent residence to the resort. The Balzaín never had financial claims with its almond trees, so gradually farmhouse farming dwindled to insignificance. Over time, the houses of La Fuente where workers and other units such as barns, stables lived, etc. were abandoned, remaining as vestiges of the past, ruins where decades later the grandchildren of Bartholomew staged his adventures and fantasies.
El Cortijo became the family vacation spot, the thirty cousins and friends gathered the summer months and spend unforgettable days of nature and excursions. Any time was good to go to the farm: Christmas, Easter or bridges. But again, one’s life happened and children, grandchildren Bartholomew, who filled the farm life, grew up and formed their own families. It was becoming more difficult to gather the whole family, 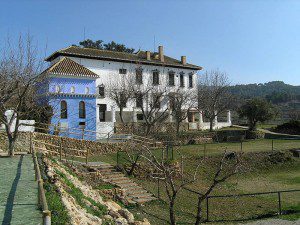 so had to find an alternative for the Cortijo Balzaín regain his life and family tradition. It was around 1998 when the idea of creating a rural complex, a remodel the old buildings and offer a cozy farmhouses emerged so other families will enjoy this land so special.

In 2000 the Cortijo Balzaín cottages were inaugurated. Since then, children have returned, life has returned. That special feeling lingers and is enjoyed by families from all over the world.

There will always be tomatoes in the Garden of Pepe that”steal”for excursions; and cobs in the cornfields of the source toasting afternoon; Blackberries in”The road”where take risks and have fun; and, of course, there will always be almonds, because one of the secrets you’ll discover in the farmhouse is that almonds are equal to or more good greens mature.

There is no concrete explanation, or a unique feeling, but it happens all visitors. Leaving the farmhouse, as you navigate the road to”tablet”and cross the”gate”, always the same question arises dye sad: When we come back?
And it is inevitable. You will come back.

By the way, one child with tuberculosis was cured and now has his eighties. It may seem exaggerated, maybe my years in the farmhouse make me subjective, but the Cortijo Balzaín cure body and soul. Five generations of the family Ros attest to this.